skip to main | skip to sidebar

On blogging and reviewing 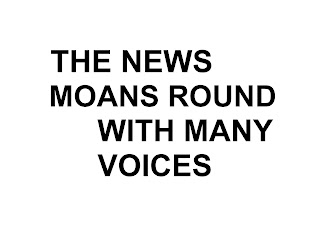 Over the past two years, I have been a festival blogger at six festivals, reviewed another few concerts, exhibitions and performances, and wrote for an e-zine on art and journalism. The first thing to say about this is that festival blogging is a very intense and extreme kind of fun. It requires you to see everything - or at least as much as possible - and be alert fulltime, to hurry from venue to venue, and sleep four hours each night at most because you have to do most of the blogging directly after the performance. This makes festival blogging a somewhat frantic and macho enterprise, with a readership that is generally limited, but it is also, in my view, the only way to do journalistic justice to a festival in full, rather than writing a pick-and-choose review of the highlights afterwards. I will probably have less time for this in the future (starting as a PhD student next February) but there are some observations from these two years of experience which are worth sharing because they are of a more general interest.


1. Blogging is not a pretext for sloppy journalism. To write something that really adds substantial new information, you'll have to do research, interview the participants, record and re-listen, and preferably do some editing before you press 'publish'. Of course, working under high time pressure, you have to be impressionistic and associative at times. The good news is that you can always edit afterwards. That is one of the main differences with printed journalism.

2. Find a niche. Don't believe the hype about viral spread and the wisdom of the crowds. Blogging can never compete on main news issues with funded professional journalism, so blogging only has a surplus value when it fills a niche. In that niche, there are no crowds. With my writing about interdisciplinary art and new forms of artistic presentation, I'm glad enough if I get a few 'likes' on facebook and some friends repost it. Still, within that niche people will be thankful as long as what you write is relevant (it need not even necessarily be positive); they do not receive that much honest and detailed feedback anyway.
[One composer once told me that he had never thought about his work in theatrical terms before, and now was buzzing with ideas for musical theatre. That made my day.]

3. Link and embed. This is the only way in which content in e-journalism differs structurally from printed matter. It is a substantial advantage because you can show what public sources you use, point people who want to know more in the right direction, and give your audience an idea of what you're writing about. Don't expect too much about it though: if there are no cookies only a paltry few people will actually watch those viddies and click those links. Still, it is an asset because it actually gives e-jounalism a higher degree of transparency than printed journalism - if done well.

4. Don't merely report. This is an advice about art journalism in general. There is only so much you can say about each individual art work and you'll quickly start repeating the same adverbs and metaphors. Plus it's not really interesting to say about each of them, it's good, it's not so good, it's fantastic, it's so so. Even if you give arguments for those judgements you'll end up repeating the same arguments time and again, which will make you look pedantic no matter how hard you try to be open-minded because you have to be consistent all the same. My solution to this has been to write about how particular works and performances represented current developments in the arts at large - giving an introduction to "what is 'contemporary'" by blogging Something Raw, for instance. Even so, I have often felt like a wine-taster when writing about contemporary music - lacking the technical knowledge to give a detailed analysis of the musical structure, there was no other way of describing the music than evocatively and paraphrastically. Which is also one reason why embedding is so important, if the material is available. If you can show it, there is less need to describe it at length.

5. Accept your mistakes. In each blog there will be inaccuracies, and every now and then you'll make a mistake so embarassing it makes your eyes bleed. No matter how hard you collect data, you will always find out while writing that you miss one important bit at least. Fortunately, you can correct afterwards. It helps if you're not too particular about your own judgement; and if you want to give a crushing review of something, make sure you get the facts right.

6. Don't be unnecessarily critical. No one is helped with negative judgement if there isn't a more general point to be made from it. If you don't know what to say about something, or if you think it's so-so, don't write about it. There's enough to write about anyhow. Only if criticism is really well-deserved - if the work is pretentious and doesn't live up to its pretensions, or if it could provoke an interesting discussion - it is worth the candle. Good criticism is a conversation-starter. "You suck" is a conversation-stopper.

7. Blogging ain't hip anymore. Half a decade ago, everybody was starting up their own blog. Most of these blogs now lie vacant and rightly so. People are now doing their daily chit-chat on facebook and only the bloggers that are willing to spend a lot of time on quality blogging still can get something out of the medium. The great problem, however, is visibility. E-journalism can only survive if there is a community: facebook friends that read your blog, and websites that repost or link to it. In this respect, e-journals might have a higher viability than blogs because they are better at community building; on the other hand, blogging is a lot more flexible because you can do it on your own at the moment you like.

8. The archive. That is the last main advantage of blogging over printed journalism, and it is also why substantial amounts of newspaper content are cast in a blog format in the online version. What you posted in the past is much easier to retrieve. This is also a reason for posting not too much crap and ad-hoc musings. People must enjoy browsing through your blog.

9. Always re-read before you press 'publish'. And re-read afterwards. On average, I re-edit a text three times after I posted it, no matter how carefully I check beforehand.
Gepost door Floris Solleveld op 22:11